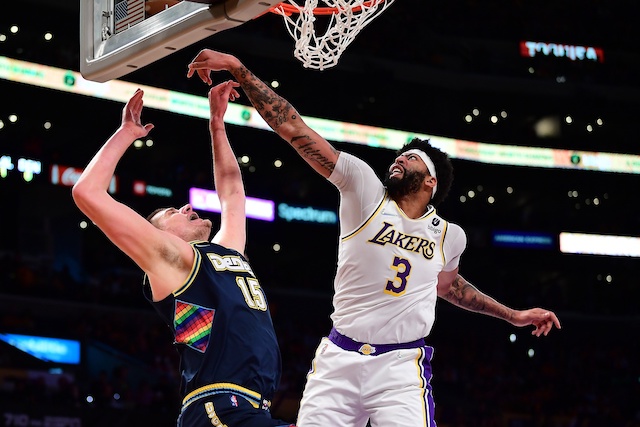 After sustaining a horrific foot injury after falling on Rudy Gobert’s foot, Los Angeles Lakers superstar Anthony Davis has been working tirelessly to get back on the court and try to help his team qualify for the playoffs.

The big man has made his comeback and while he’s been good in his two return games, he’s clearly not 100% and the Lakers still haven’t been able to win on the side of things.

But as long as the Lakers still have a chance to make the Play-In tournament, Davis plans to be on the court even if he’s not quite at his best. Talk with Dan Woike of the LA TimesDavis insisted he would get over his team’s pain:

“At this point, I know what we’re playing for,” Davis said. “If I have to go through this pain – I hope it’s not the last four games, I hope it’s more – then so be it. I know that me, myself and my team know I left it on the floor. Just like I did in the playoffs last year. Give me a chance – and help give our team a chance.

Injuries have been the story of Davis’ career and although many of his early problems were minor, the last two seasons have been more serious and he has drawn criticism for his inability to stay down. While he had been relatively healthy the previous four seasons, including his first with the Lakers, the past two years have been tough.

Last year, Dabis suffered from heel and calf issues after the extremely quick turnaround between seasons that cost him 30 games and hampered him in the playoffs. This year he had to deal with an MCL sprain as well as the horrible ankle turn that caused a midfoot sprain. This has led some to call him soft, but Davis feels he’s in a no-win situation with these issues:

“Here’s what I learned about injuries: Last year, when I wasn’t playing, people were saying ‘AD give up on their team. It’s the playoffs. AD has to play. He has to play. And when I went to play there, I got hurt again, they said, ‘Who was his coach? Who let him play?

“So what is the [expletive] do you want me to do? When I play, it’s a problem. It’s a problem when I’m not playing. Ultimately, I have to do what’s best for me and what my body feels. And we go from there. I don’t care who says what or who thinks that about me because none of them have walked the floor and played. And those who have played, they should understand.

The unfortunate part of Davis’ injuries this season was that they were pretty unavoidable. The MCL sprain occurred when a player fell backwards in his knee and bent the wrong way. The sprained foot speaks for itself as players fall on other NBA players’ feet all the time, and it’s something Davis realizes and refuses to allow him to hold it back:

“Real basketball players know there’s nothing I could have done in those situations,” Davis said. “What? Get out of the way? I keep this attitude because, one, my wife is doing it to me, and two, it’s knowing that it really wasn’t my fault. How can I be depressed or upset or care what people say? It could have been anyone. I could wear shoes that reach my knees.

Unfortunately for Davis, he’s been hit by the injury-prone tag and so every time he falls, he’ll be met with sighs and eye-rolls from many. But the big man will keep fighting through it all and try to deliver on the pitch as best he can for the sake of his team.

Have you got subscribed to our YouTube channel? It’s the best way to watch player interviews, exclusive event coverage, participate in live broadcasts and more!