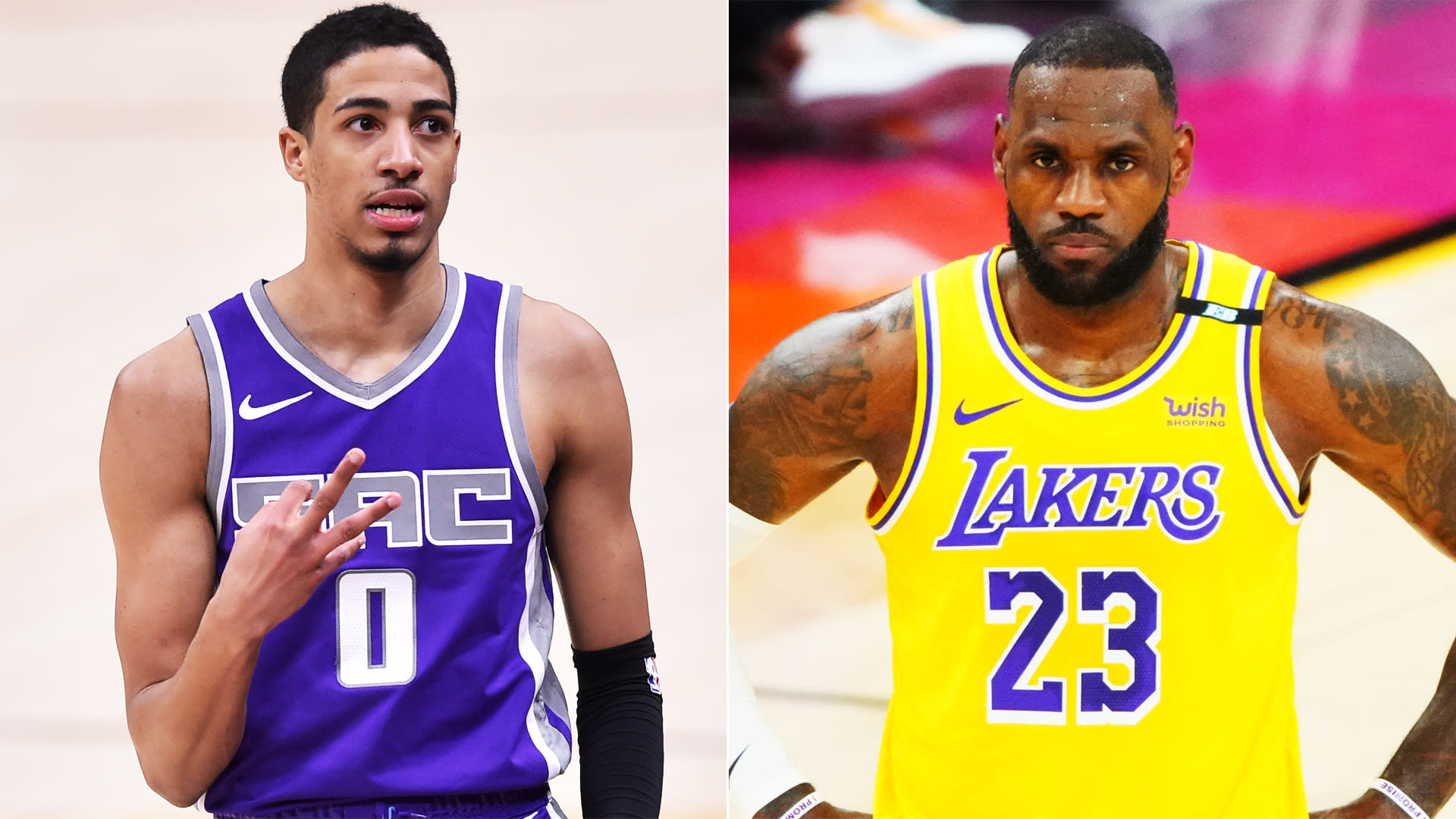 Like many kids who grew up in the Midwest in the late 2000s and most of the 2010s, Kings guard Tyrese Haliburton was a huge LeBron James fan.

Born and raised in Oshkosh, Wisc., Haliburton was firmly in the corner of the former Cleveland Cavaliers star and a native of Akron, Ohio.

But being a LeBron guy meant Haliburton had to despise Los Angeles Lakers icon Kobe Bryant.

“For me, it was LeBron my whole life,” Haliburton told Deuce Mason and Morgan Ragan on the “Deuce and Mo” podcast Monday. “All the jerseys. I had the Fathead, the big signature big dunk tomahawk poster. I had it all. What’s crazy to think is that because of the LeBron-Kobe debate, when I was a kid , I was anti-Kobe. Like, I knew how good he was, but he was obviously the main threat to LeBron. My mom always used to run Nike and go to the store and bring back Kobe stuff at home, like t-shirts, shorts. I’m like “Mom, I don’t want this. Don’t even give it to me.” I started to wear his shoes as I got older, but the clothes I couldn’t wear. “

The good news for Haliburton is that as he grew up on his own he began to appreciate the greatness of the late Bryant, who tragically died in a helicopter crash in Calabasas, Calif. On January 26, 2020. with his young daughter Gianna and seven others.

“Then, as I got older, I started to appreciate [Bryant] more, “Haliburton said.” Now he’s gone, but I’ve grown to appreciate him more as I got older. I truly believe he is the best player to ever touch a basketball, the most talented I think. But when I was young, I never would have said that. “

As for Haliburton and LeBron, the rookie missed the first Kings-Lakers clash on March 3, while James missed the second meeting April 2nd. Finally, on April 30, the two clashed. Surprisingly, Haliburton had no nerves or butterflies during Sacramento 110-106 victory over Los Angeles at Staples Center.

“No, I’m not even going to lie to you,” Haliburton told Mason and Ragan. “There weren’t any, really. It was at the end of the year, so at that time, [De’Aaron] Fox was out, we were working for the playoffs, we’re in LA. It was just ‘I’m ready to go.’ LA had beaten us pretty badly at home the previous game, so I was very stuck for that game and I knew I was going to have to handle a bigger load offensively and defensively. And then be guarded by Dennis [Schroder], who’s going to pick me up in the open field and stuff, I was so locked up that day that I didn’t even think of something like that.

“But it was a cool time being on the same floor as him. My mom called me after the game and said, ‘I thought you were going to be so nervous. “‘Nah mom, it’s the end of the year, I’ve played almost everyone now, so it’s not like that anymore.’ “

Haliburton and LeBron will see each other for the first time during the 2021-22 NBA season on Friday, November 26 at Staples Center with Kobe’s retired No.8 and No.24 jerseys hanging in the rafters, looking down on them.