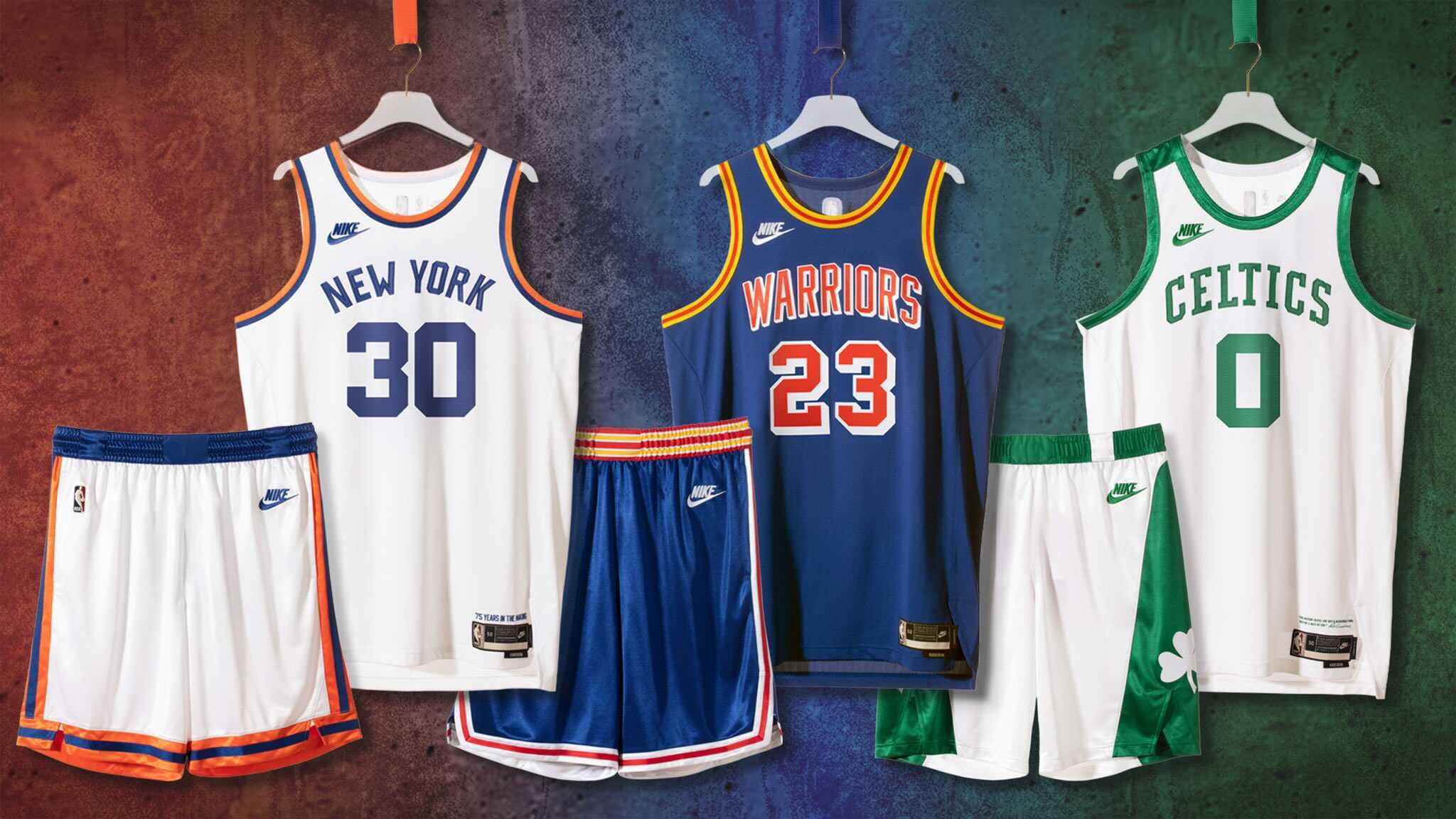 Welcome to Cloth Talk! An ode to the phrase coined by DJ Khaled, Gilbert McGregor and Kyle Irving of NBA.com delve into everything NBA style. From uniform reveals to sneaker choices and everything in between, the two experts give their opinion and shed some light on concepts that are impossible to ignore.

In the latest edition, the two discuss the three new “Classic Edition” jerseys, unveiled for the 75th anniversary season of the NBA.

Honestly, the 2021-22 season will be here before we know it, and it’s a very special season, because it’s the 75th anniversary season of the NBA. On draft night, the league announced that â€œNike will celebrate NBA 75 with diamond-embellished jersey details and new Classic Edition and City Edition uniforms across the league. “

Well, we’ve got our first look at the new Classic Edition uniforms for this season.

Designed exclusively for the league’s three original franchises – the Boston Celtics, Golden State Warriors, and New York Knicks – these take you back a few decades (we’ve yet to get you to see “Back to the Future”, either. passing) and are the first uniforms to feature the retro Nike Sportswear lock logo, as highlighted by Boardroom on Twitter.

Will be worn only by the Knicks, Warriors & Celtics – three of the league’s original franchises. pic.twitter.com/CrZ6IjrYAY

Do you feel them, or what?

Kyle Irving (@KyleIrv_): It is a categorical yes on my part. It wasn’t a situation where I was like, â€œhuh, they’re fine, but they’re going to grow on me,â€ and now that they’ve been out for a week, I’m on them.

I’ve been on them since the second I saw them. The current play on retro jerseys is a cool concept overall, but there’s something about this retro Nike logo that really brings the theme together.

The New York Knicks’ ones are a bit simple, but simple can be good. The Warriors really have that retro vibe. Those of the Celtics … ** cleared his throat ** THE SHORTS. You gotta cop. I will stop there.

McGregor: It’s funny, as if Nike didn’t even exist back when these uniforms were introduced, but something about the retro Swoosh makes it feel like it was meant to be there from the start.

A + execution in my eyes.

I’m with you on the Knicks, they’re straightforward, but they’re exactly what they need to be. Fits, as the Knicks went for a similar “Fauxback” look when the league celebrated its 50th season 25 years ago, so it was only right that they did.

For the Cs, I think the execution was pretty good, given that I think the uniforms they’re based on actually had sleeves. Maybe that’s why something seems a little out of proportion, but again, I’m the one nitpicking.

In fact, I think the Warriors are my favorite of the bunch. They had to make a slight adjustment, as the original uniforms read “PHILA” for their time as the Philadelphia Warriors, but the incorporation of the blue, red, and yellow really makes a photo in black and white just came to life for me.

The rollout on social media was also pretty good.

After 75 years of Warriors basketball, it’s time for the past to meet the future

Origins of the warriors || @Rakuten pic.twitter.com/ZQF9AHVfHy

Origins of the warriors || @Rakuten pic.twitter.com/mznqhpxZux

Irving: Haha, man. Let’s go with more Back to the Future references. I understand, I need to catch up with my pop culture. (edited)

No, but really, the deployment was perfect there. The Chuck Taylors getting out of the car. These viral photos of Klay Thompson are too good. Side note: I can’t wait to see him on the pitch again next year.

But overall I’m a huge fan of what Nike has done with it. Probably a bigger fan than most.

McGregor: Lol, you see, I left that one to interpret.

Supposed after you mentioned it once (twice if you count the first time I mentioned it in a previous “Cloth Talk”) you would see the vision haha.

That makes both of us big fans, though. Overall, simple designs kept them from overdoing it which, in my opinion, is the best way to celebrate such an occasion. I also want to highlight the waistband of the shorts, not sure if you noticed the color and / or fabric deviations, but I think it’s a super cool nod to emulate when the basketball shorts once had belt loops

Irving: Wow, that’s a great eye from you. I certainly noticed it (especially on the Celtics shorts, because, how could you not?), But I didn’t know there was a meaning behind it. Just another intricate detail of these uniforms that makes me love it even more.

I wonder what else Nike has in store for the NBA’s 75th anniversary season. We’ve seen some teams report drug returns last year, but I feel like there must be something big in store for this pivotal year.

McGregor: You stole the thought from my brain.

Based on the NBA’s statement that new City Edition uniforms will make their league debut, I’m preparing for what’s to come. Before we end here, is there anything specific that you would like to see in this new set of City uniforms? Maybe from any team.

Irving: Nike always does a fantastic job paying homage to the little things that make every NBA city unique through the City Edition uniforms, so hopefully they will continue to do so even with new uniforms launched in the league.

On the 75th anniversary front, one thing I’d love to see is retro warm-ups for every team at all levels. I have the Larry Bird 1988 3-point Contest shooting jersey in mind when I say that.

Nameplates on the back and everything. I think it would be a nice tribute to honor the 75th season with some retro jerseys that I expect.

McGregor: This is not where I expected you to be speaking at all.

But I love this.

You reminded me of an honorable mention of the Pistons adopting elements back to their warm-ups with the name on the chest, kind of like a mechanic, honestly.

Suitable for Motor City, where warm-ups with “Cade” on the chest might be a popular item among the next generation of hoops.

But my real choice would be for the Pelicans to integrate the Hornet era brand. I know the nickname is back in Charlotte, but 11 years of New Orleans Hornets history remains with this franchise.

It might just be me, but seeing Zion Williamson, Brandon Ingram, and Jonas Valanciunas (always feels weird to type) in teal, purple, and gold would be awesome. Or maybe they’re just incorporating stripes, but they have to do something about it.

No matter what it isâ€¦ I’m on top of it. And I can’t wait to come back here and talk about our favorite City Edition uniforms for the 2021-22 campaign.

The opinions on this page do not necessarily reflect those of the NBA or its clubs.